Contributing to a circular economy at Kokkola

In addition to recycling large quantities of metal, did you know that Boliden has also served society for decades by recirculating its excess heat and chemicals?

The Kokkola Industrial Park (KIP) in western Finland is one of best examples in Europe of how industrial synergies developed since the 1960s contribute to a circular economy – originally based on meeting practical needs and reducing costs.

The companies located in the KIP are intrinsically linked with one another, with many synergies based on material and resource flows in closed systems. Excess heat and steam from the Boliden Kokkola zinc smelter are used to generate municipal district heating and electricity. Sulphuric acid produced at Boliden’s sulphuric acid plant is used as a raw material by other companies in the KIP. 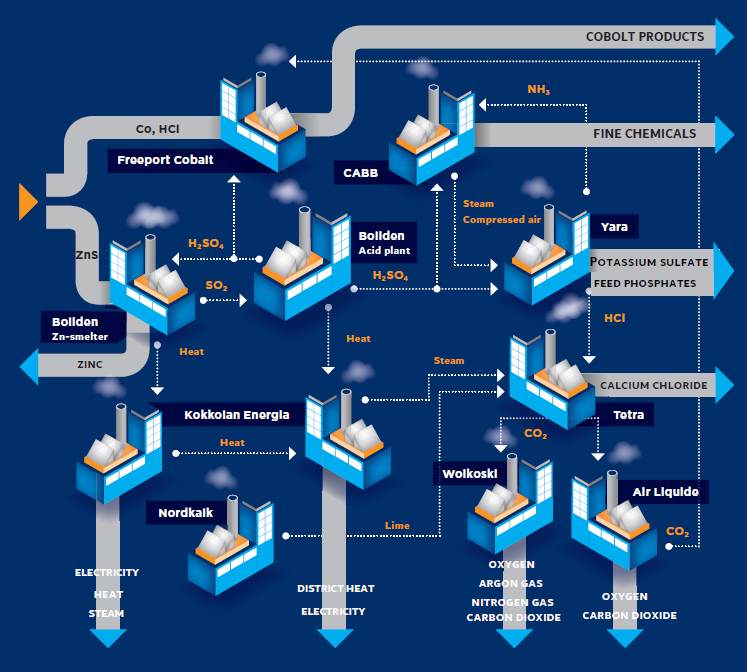 Our excess energy heats and powers homes and businesses
Boliden sells the steam it produces in the zinc roasting process to the municipal energy company that generates electricity from the steam. “In 2017, we generated 320,000 MWh of steam that was used to produce electricity, district heating and low-pressure steam for industrial partners in KIP and local households. This equates to the energy use of approximately 16,000 households,” explains Kai Nykänen, Environment, Safety and Quality Manager at Kokkola.

“We also deliver excess heat directly from our sulphuric acid plant to the municipal district heating plant,” says Nykänen. “In 2017, we delivered around 125,000 MWh of heat, which is enough to heat approximately 6,000 homes as well as some buildings in the KIP.”

Reducing CO2 and costs
Boliden Kokkola produces a great deal of energy in its processes. The energy generated is classified as carbon-free as the main fuel in Kokkola’s roasting process is zinc concentrate, which contains almost no carbon.

“By providing excess heat and steam to the municipality, we also gain free carbon allowances, which means that we don’t need to buy any allowances from the emissions trading market,” claims Nykänen. This combined with the fact that Boliden Kokkola is one of the most energy efficient zinc smelters in the world, and purchases renewable electricity, ensures a relatively low carbon footprint among Zn-smelters (1,910 kg CO2e/t of zinc).

Win-win industrial synergies
The zinc roasting process produces sulphur dioxide (SO2), which is sent to the sulphuric acid plant for conversion into sulphuric acid (H2SO4). Pipelines in the industrial park deliver acid and other products in closed systems to neighbouring industrial partners, which reduces transport-related emissions and costs.

“Everyone wins by creating value from the by-products of others and using them as raw materials at KIP,” explains Nykänen. “Our sulphuric acid is widely used by other companies in the KIP area in their processes or to produce other chemicals, such as potassium sulphate.” CO2 and other air gases are also important outputs from processes that are used at KIP as inputs by other companies.

“The environment is also a winner as the synergies we have created in Kokkola reduce our carbon footprint and environmental impacts,” says Nykänen.

The energy needs of approximately 22,000 homes were met in 2017 by excess heat and steam from Boliden Kokkola.

“Everyone wins by creating value from the by-products of others and using them as raw materials at KIP,” says Kai Nykänen.

What is a circular economy?

A circular economy goes beyond the current extract-use-dispose industrial model, to create circular systems that gain the maximum value from resources by recovering and reusing materials at the end of each service life.