The ShotCrete app, a bold investment with a successful result

In 2018, the ShotCrete app was introduced as a quality improvement tool for sprayed concrete in the Boliden Area’s mine in Renström. Today, they expect the app’s success to spread to other Boliden mines. 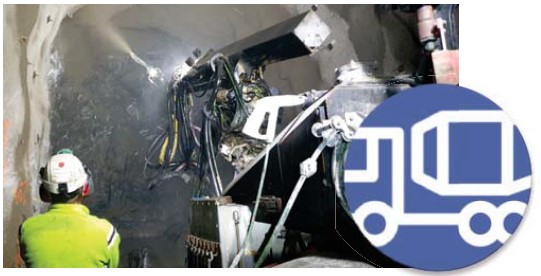 Ike Ubaka, a development engineer from the Boliden Mining Technology department, has been working with operational support for shotcrete in Renström since 2015. Over the years, Ike discovered deviations in concrete handling and had an idea. He proposed a system or tool able to handle concrete control, monitor deviations and improve the quality of shotcrete underground in the mine. Erik Fjällström, who at that time was production manager in Renström, saw the proposed improvement as an opportunity. When Erik approved the investment, Ike developed an app. During development, he received excellent help from Roger Walter of the Boliden IT department and an external consultant. Thus the app was initiated and developed from start to finish by Boliden.

Following a series of workshops with mine operators, thoughts about the design and development of the tool were put forward. ShotCrete version 1.0 was introduced in the middle of September 2020 and has been in use in Renström since then.

Thanks to its success in Renström, interest in the app has grown, and it was recently implemented in the Kristineberg mine. Now they plan to use it in the Kankberg mine. Requests for information keep coming from other underground Boliden mines for possible use in their production cycle.

Here's what Ike Ubaka has to say about his innovative app.

“The app is an important tool for making Boliden's underground shotcreting more efficient. Integrating the app into Boliden's shotcreting cycle will help to control concrete consistency, monitor deviations and track the performance of the shotcrete process including historical data.”

This also means all shotcreting operations will be controlled and evaluated, and that suitable measures can be taken in real time. It means the mine will have total control over its shotcrete operations. Data reported into the app is used to generate production reports such as spraying deviations, concrete consistency trends, shotcrete performance and early compressive strength analysis, etc. for continuous improvement.

The app covers six stages in the shotcrete operation, beginning at the concrete plant and continuing all the way to delivery at the underground shotcreting point.

Erik Fjällström, Mine Manager and project initiator explains: “There was a total lack of control on the purchased product. The organization had no tools to allow control and follow-up. This created chaos that was often blamed on concrete quality, when the fault might well have been our machine’s. We have no idea how many cubic meters of doubtful quality concrete were sprayed. When we began testing and following up, interest and expertise among our employees grew. The demands on the supplier to deliver a good product have grown. We have taken control. Now all that remains is for employees to get feedback about the product and their own results. If we succeed, we will have greater influence and the opportunity to convince our operators. Controlling delivery, sprayed concrete execution and the link to a site or object will allow us to check back in time. This is a tool that allows rock mechanics to follow up and develop reinforcement methods.”